As you know I am a BIG fan of Guerilla. It is probably the best render engine I have seen in production. As a lighter
I am always looking for a tool that is easy and flexible. I had a couple of ideas that may improve our workflow in Guerilla. ;-) 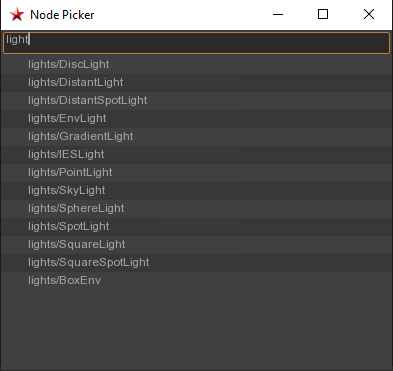 In my opinion they are too much lights by default. In most studios I have worked, they have a tendency to reduce the number of lights.
"Less is more". Generally we have: EnvLight, DistantLight (eventually combined in a SkyLight), Area Light and that's about it...
We could probably add 'MeshLight' to the list but that' a different story.

2- When I look at this list, I think there is a confusion about the actual lights and the presets.
It looks like 'GradientLight', 'SpotLight' or 'IESLight' are actually light sources. When they are only presets, right?
I think it would be easier with something like this: only 4 lights and the rest are presets (combination of light shader and a proper light source). 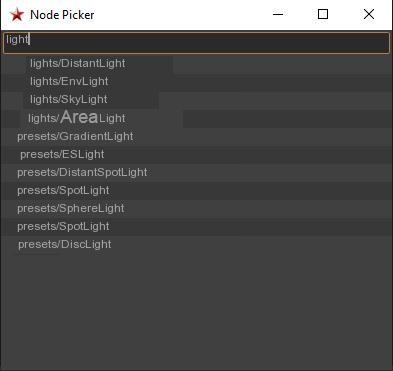 3- Also it would be neat to rename the 'Square Light' to 'Area Light'. It would make more sense and bring us closer to other softwares.
Probably less confusing for a new starter of Guerilla. I would also love to remove the 'Decay' option from our lights.
Changing the decay could be potentially lead to some render mistakes, right? So why not remove it? ;-) 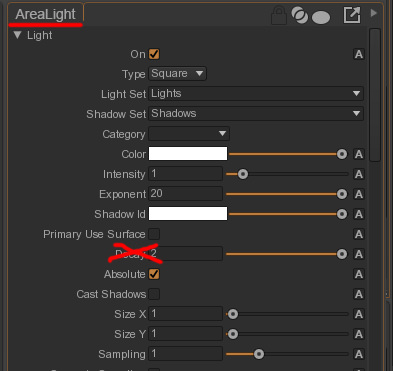 4- I am also a bit confused by the 'PointLight'. Why is it under the same category of 'Sphere', 'Disc' and 'Square' which are all 'Areas'.
You cannot make the Point Light bigger nor change its Angle, right? Therefore you will always end up with sharp shadows.
I would probably remove this light as it is does not exist in real life. Or at least remove it from the 'Area' Lights category.
Would be nice also to have a cylinder light... ;-) 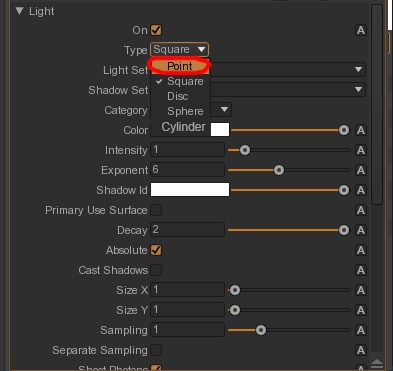 5- An other detail but would help: Could we rename the 'light shaders' to 'light filters'? Would be less confusing for new starters.
And I would love to see some 'Invert' option on the existing light shaders: box, cone, cylinder and sphere. 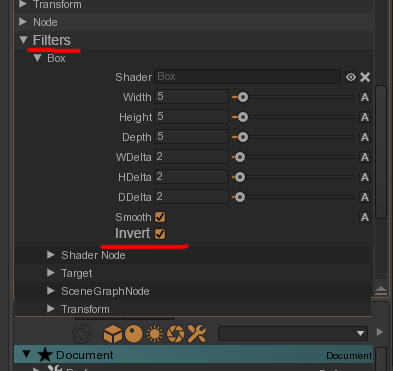 6- We could also add 'barndoors' to the light filters. They are quite useful.

That's about it... Most of these comments are not life changing but I think they would help...

Thanks for the feedback!

1 & 2. I admit the light library is a bit messy, and we could take the opportunity of the next 2.2 to clean this up a bit.
Note that we potentially have some running productions relying on these files existing at some point, so I don't want to break this for aesthetic reasons only

3. Square light is ok by my book, so an alias would do it?
Decay is sure wrong, but we have people out there that rely on it. So, nope, sorry

4. The type controls the kind of shape the positional light has. So, it might be an infinitesimal point light, a square, a disc or else. And same reason as previously, some productions are really using them!

5. Well, by Guerilla's naming, these are shaders, which you can edit and customize. So I'll leave that as Shaders. Gizmos would do it equally good

6. Yes, barndoors. Quite some work to implement, though.

There's one thing I forgot to mention.

7- That would be awesome to be able to share light shaders (cylinder, box, sphere...) between lights. Sometimes you want several lights to share the same "blocker"...

Anyway thanks for having a look!

Keep up the good work!

I was playing a bit with some gobos in our lights and I had two questions:

1- Is the blue square supposed to be a preview? Am I missing something to make it work?
2- Should not we have access to the same option than when we plug a map in a surface2 shader? (Gamma, Color Correction, Image Sequence...) For the texture controls, the controls should be there, it is just a matter of exposing the texture parameters, though.

Thanks Ben! I'll have a look!
Happy New Year!

So I was reading this thread  from 2018 and was wondering if we could have another look at a couple of features for the next versions. From what I have read on the Discord server , there seems to be a great interest for :

1- Photometric units for Guerilla lights (lux, lumen, watts).
2- Barn doors as a light shader.
3- A cylinder light.
4- The possibility to invert the light shaders (so they remove light instead of letting it through).
5- The possibility to share a light shader between several lights.
6- To have the same options of Surface2/Texture (Gamma, Filter, Width, Blur, Color Correction, Image Sequence...) when we use a file in a light (through a cone shader for example).
7- Clean of the light library (are there too many options ? I am happy to provide some ideas if you need to).
8- I still have an issue with the Point Light being listed in the same way as "physical lights" such as Disk/Square/Sphere...

I can provide screenshots if needed (most of them are available in my previous messages).

That's fairly tough, to be honest.
This requires introducing units everywhere, calibrating everywhere. Not a small rework for sure.

2- Barn doors as a light shader.

This is a common request. I'll check what's implemented in other lighting softwares.

There's a cylinder shader, but no cylinder light. That may be nice to add to the lib.

4- The possibility to invert the light shaders (so they remove light instead of letting it through).

The light integrator relies on the shader being a convex volume, so that's fairly uneasy to do.

5- The possibility to share a light shader between several lights.

You can already add a light shader at any point in the RenderGraph, so you should be able to share a light shader among several lights, yes. Check the LightAttributes node.

6- To have the same options of Surface2/Texture (Gamma, Filter, Width, Blur, Color Correction, Image Sequence...) when we use a file in a light (through a cone shader for example).

If you dive into a light shader, you'll see that the texture in the light shaders is a regular texture node. Sure it is not fully exposed, but you can already manage to get all the options filled right.

7- Clean of the light library (are there too many options ? I am happy to provide some ideas if you need to).

As usual, I'd be happy to clean up a bit, although I don't want to get current studios stuck because we removed something they were actually using. But sure, send me your suggestions!

8- I still have an issue with the Point Light being listed in the same way as "physical lights" such as Disk/Square/Sphere...

Arh, to get to hard on the physicality of these. I admit these don't fit so well, but they still find use in various studios, for various purposes.

Thanks Ben ! I'll send you some suggestions directly !
Have a nice day !